Here in the States we are getting ready for Thanksgiving on Thursday and I am so excited to spend a few days with the extended family.  The Imaginisce gang is also celebrating Thanksgiving all week here showing off fun things you can do with the NEW Imaginisce i-top 2.0.

I wanted to make something for the home and I stumbled across some canvases I had bought a few years ago, that were in the attic.  Later that day I was walking the puppy outside and ran across some downed tree limbs and the project just all came together. 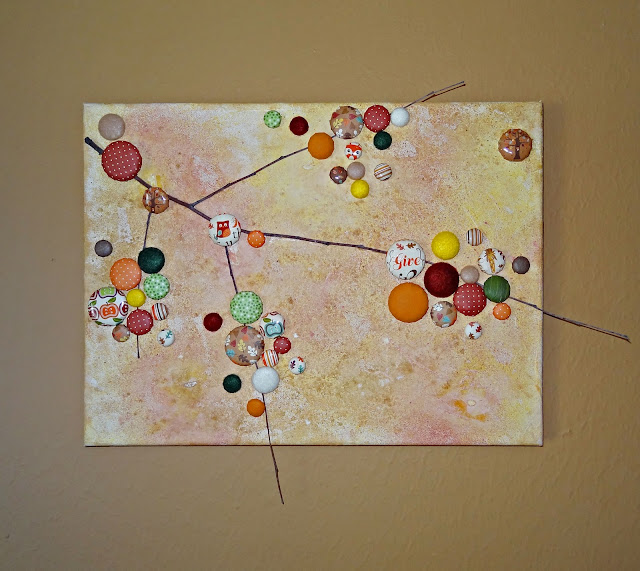 This is a really easy project to make and you could really take the fundamentals of it and make all sorts of themed designs for any season.  I', already picturing a buttons and brads and such formed into the shape of a Christmas tree, hearts, etc.

Here's how I made mine: 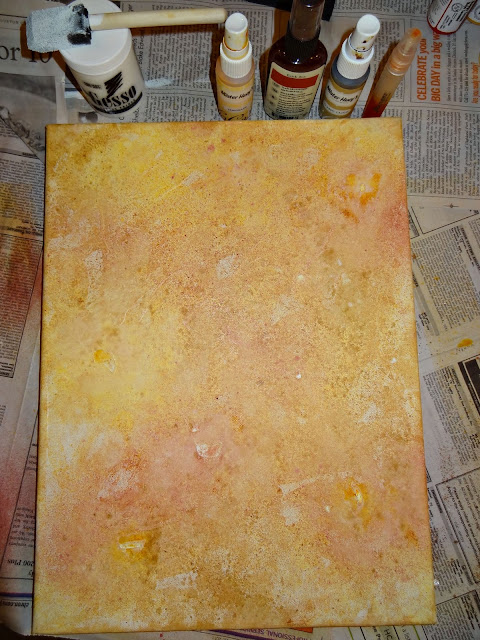 Thanks for stopping by today!  Make sure to head over to the Imaginisce blog and leave a comment over there for your chance to win your own new i-top 2.0!

Oh and do you want to know the best thing about this project?  I gave each of my daughters a canvas and let them go to twon on them with paint.  I am going dedicate a blog post to them and their projects within the next day or two.
Posted by Unknown at 8:27 AM 5 comments:

My baby girl turned 3 at the end of October, which is soo hard to believe!  I was inspired to scrap the photos of her blowing out the candles on her cake by this week's Sketchy Thursdays sketch and the Happy Day collection sent to me by Simple Stories for being their guest designer this month (THANKS for having me). Check out those projects in yesterday's blog post. 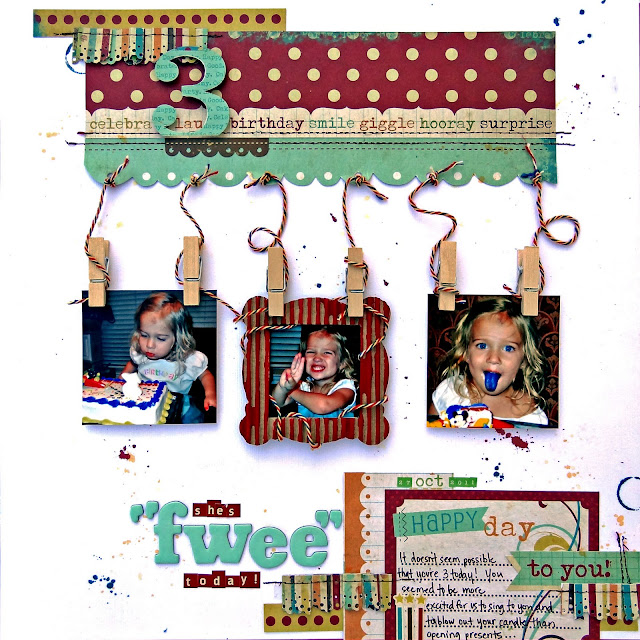 Supplies: Simple Stories Happy Day Collection: Let's Party, Flash Cards papers; Signature Elements 2x12 & 4x12 Title Strip Elements, 12x12 Fundamental Cardstock Stickers; American Crafts Thickers "Stroll"; Cosmo Cricket Tiny Alphas in red/cream; Kaiser Craft Tiny Alpha Stickers "Toffee Apple"; Mister Hueys Color Mist in Lemonade; homemade blue mist; Shimmerz miniZ "Bed of Roses"; Zig marker in Chocolate; misc. red/white/blue twine; Martha Stewart punch; Glue Arts Glue Glider Pro; small wooden clothespins; misc. thread.
The papers and bits from the Happy Day collection were such a perfect fit, from the colors to the celebration sentiments.  I just love how so much of it is done for you and helps take a bit of the guess work out.  Don't get me wrong, it took me a while to determine which particular papers to use, layering, placement, etc but all in all it came together pretty fast.
To get the paint splatters more "clumpy" than spritzy I unscrewed and removed the spray nozzle from the container.  Then I flicked it with my finger.  It's still an unpredictable pattern but it's usually right where I want it.  To get the circle ring, I sprayed some of the mist into the cap, turned it over and pressed it on the paper.

I had the red, white and blue baker's twine but I really wanted a bit of yellow so I laid it out and then misted it a bit with the yellow.  I love how it came out. 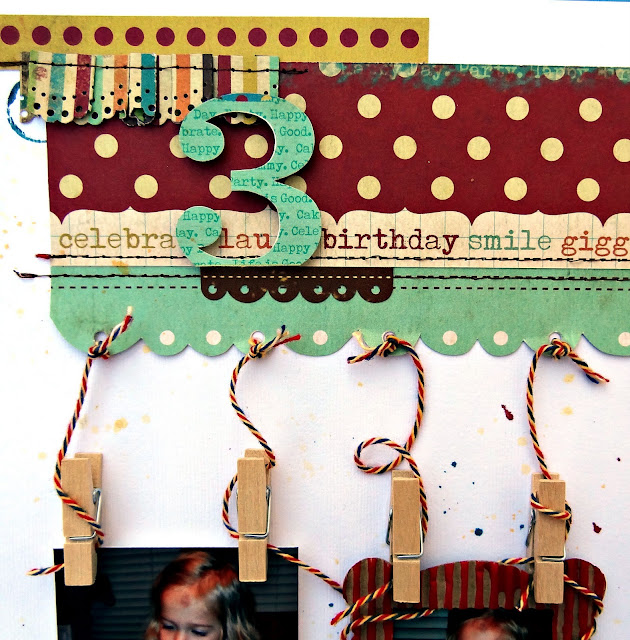 The rest was layering, punching, gathering and stitching. Here's the sketch that inspired my layout above. 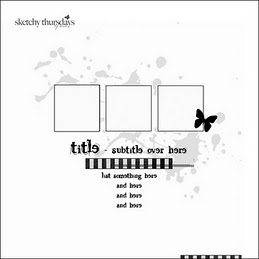 Make sure to head over to Sketchy Thursdays to see the prize that's up for grabs from Lindy's Stamp Gang for playing along this week.  Oh and guess what, we're "off" for Thanksgiving so you have two weeks to play along AND they'll be drawing 2 prize winners instead of 1!!!!
Thanks for stopping by today!
Posted by Unknown at 8:02 AM 4 comments:

I am soo excited to be guest designing for Simple Stories this month.  I won one of their collections during one of their blog contests right before CHA Winter. Several weeks passed and I never got the any mail from them so after I knew they'd be back from CHA and starting to breath again I wrote a nice reminder email. It really never gets you anywhere but fired up when you're not nice and I knew they had bigger fish to fry than worrying about my little shipment! Through that, I kind of became cyber-friends with Jodi.  After several email exchanges I got a guest designer spot! I sent Jodi my blog link and the rest is history! I guess it does pay off to be nice and now I have a new friend somewhere out there.

They sent me some gorgeous collections to play with and let me just tell you, they think of everything. If you haven't had a chance to play with their goodies yet, I highly recommend it!  Here's a couple of things I created for them.


I fell in LOVE with you before i met YOU layout
Baby Steps Collection
***No, I am not pregnant, just behind in scrapping some of my preggy photos*** 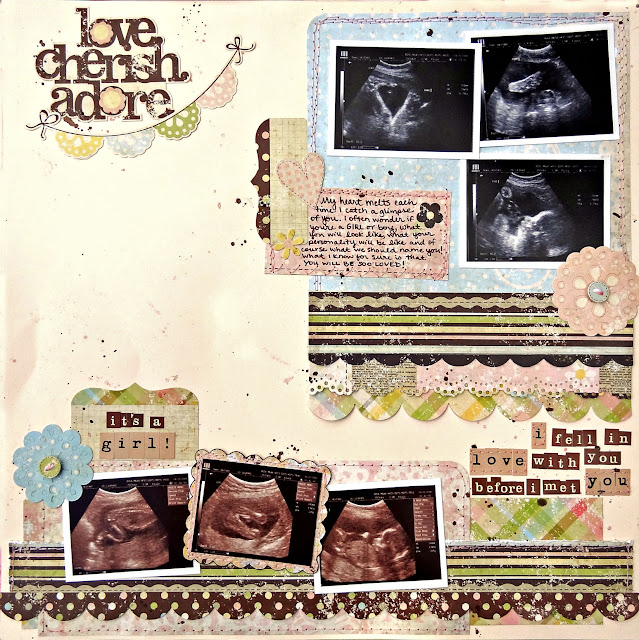 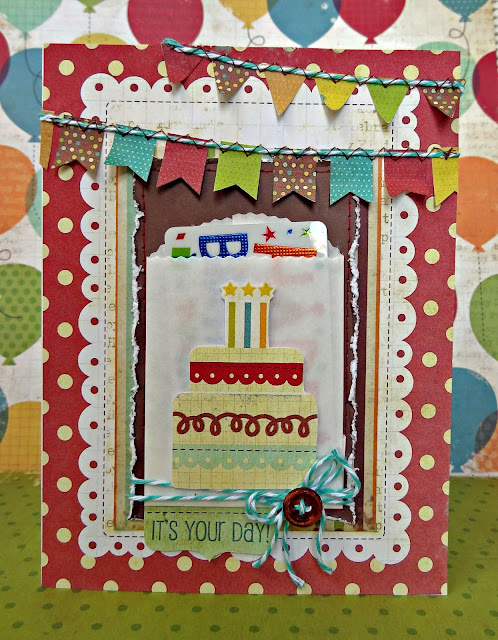 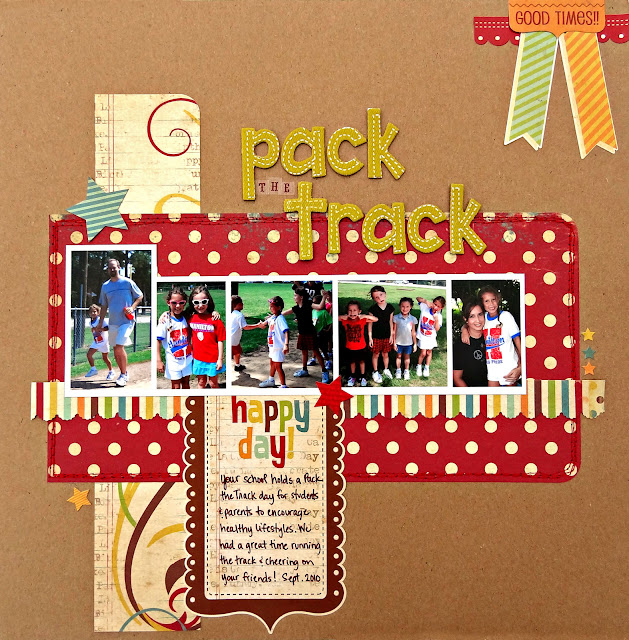 Thanks for stopping by today.  I would love it if you would leave me a comment here of course but it would mean soo much if you would also stop over and comment on the Simple Stories blog!﻿
Oh and I'll be showing you some more layouts made with their Generations line next Tuesday so be sure to stop by again!
Posted by Unknown at 5:01 AM 5 comments:

One of many things that I love about being on the Imaginisce design team is that we do swaps with other manufacturers. Glue Arts sent us a tons of adhesive and Glue Glider Pros - THANK YOU GLUE ARTS!

I came up with a lot of fun dimensional projects I could make with the stuff they sent but something told me to try something new so I decided to use the 3D adhesive like washi tape. Here's the card I made: 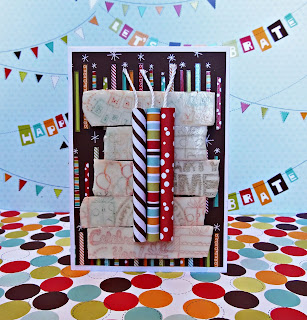 To make this I used the Glue Arts 3D Adhesive Pac which comes in one larges square.  I cut it into strips, the size I wanted, cut the sides all "willy wonky" and then took as much of the tackiness off one side of the adhesive by just pressing my fingers on it.  Then I pulled out all of the Imaginisce birthday bash collection stamps, inked them up and started stamping away.  I set it aside to dry in the morning and came back in the evening to apply it to the front of my card.  I topped it off with a few candles from the birthday bash line. Oh and I of course, always use my Glue Arts Glue Glider Pro for all my projects.  They sent us one a few months ago and I just LOVE it! Back to the card...it's still a little tacky so I won't be putting it in an envelope; instead I'm going to attach it to the top of the present, which will be wrapped in kraft paper wrapping and stamped in select spots using the same stamp sets.

Make sure to head over to the Imaginisce blog as well because they are giving away an entire collection of Santa's Little Helper!!!
Posted by Unknown at 9:35 AM 3 comments:

Finding our way through the Corn Maze

If you've been following along, you probably know how much we love out annual trip to Dewberry Farm.  There's a pumpkin patch, jumping pillows, petting zoo, tons of rides and so much more, we always have a blast! There's also a corn maze.  We always go through it but we never finish it.

A couple of us on the Imaginisce design team were give an assignment.  It's called the Art of Journaling.  That's all we were given as guidance.  I took the assignment very literally. 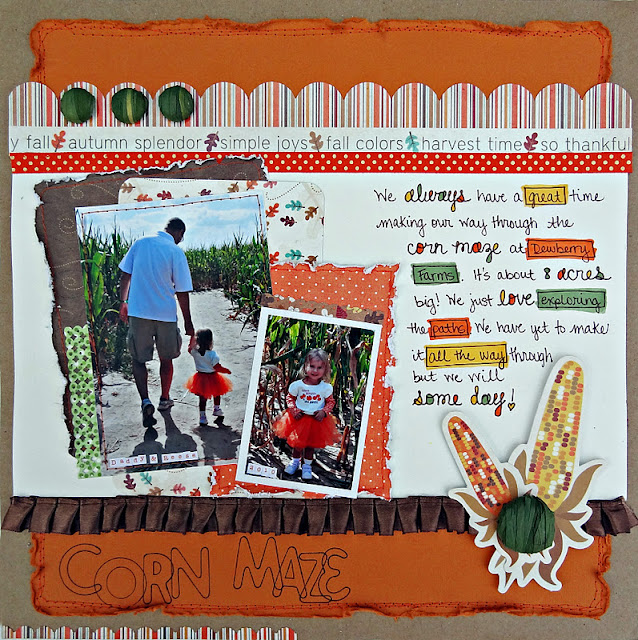 
I put a lot more focus on my journaling than I normally do and I got a bit creative with my Copics.  Here's what I did.  While sketching out my layout, I purposefully set aside about 1/3 of my "white space" for the journaling. I put the layout all together and then I wrote out my journaling on a scrap piece of paper.  I chose certain words I wanted accented.  Then I took about half of those and drew a box around them. I took the other half and wrote them in different font.  This was my guide for spacing on the actual layout.  Once I had it how I wanted it I drew lines on my layout in pencil and starting writing with my chocolate marker.  Once dried, I erase the pencil lines, drew my boxes and just randomly started coloring.

I also used the new Imaginisce i-top 2.0 tool that I recently got. I have to tell you that I just love the new i-top.  It's just easier to use and the rubber grips at the top are much improved.  Like I said, it's just easier, not that the other was hard.  :)
Did you notice that the brads I made are made from rafia?  I wanted to try to mimic the corn maze. Being on the DT (and actually just in general), I am all about trying new things with the tool. Here's what I did: 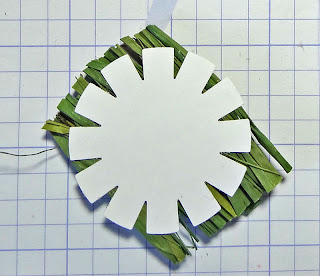 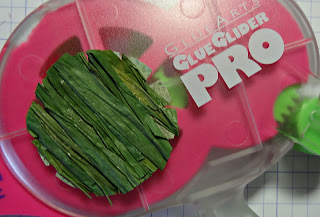 Then I attached the brad using my i-top like I normally would with paper of fabric. It was a bit bulkier but it held extremely well! 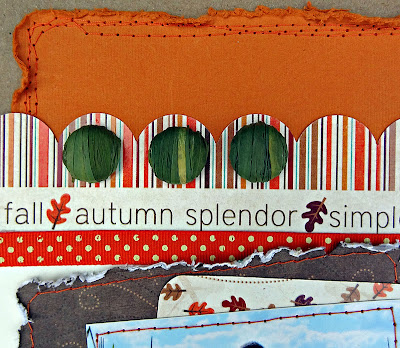 I want to show you one more thing...I made the title by tracing the negative space of alphabet chipboard. I did this because I didn't want to detract from the photos or the journaling but it could also come in handy if you are running low on alphas.  If you're like me and haven't cleaned up your scrap stash lately, you probably have some alpha chipboard laying around somewhere. 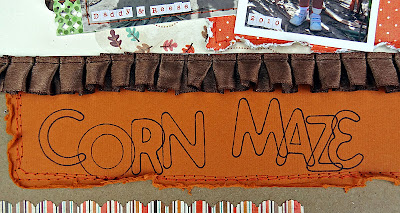 Thanks for stopping by today!
Posted by Unknown at 12:05 AM 14 comments:

The Birds of a Feather November kit is filled with gorgeousness from Simple Stories and Bo Bunny.   When I first looked at the kit the most obvious thing to do with it was to make a layout about my Family.  This Then and Now layout, inspired by this week's Sketchy Thursdays sketch, features my daughters 3 years ago with their great grandma (my grandma). 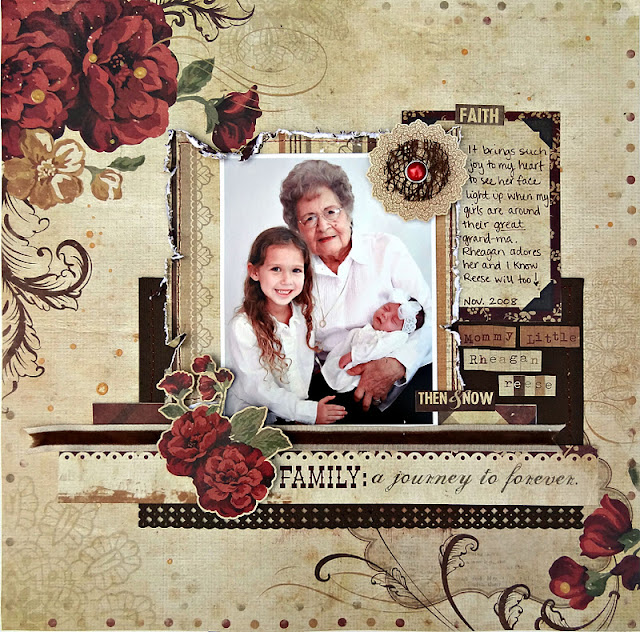 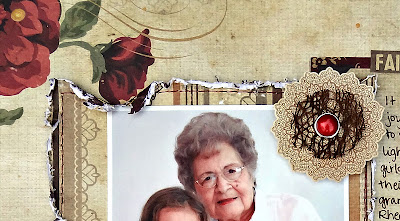 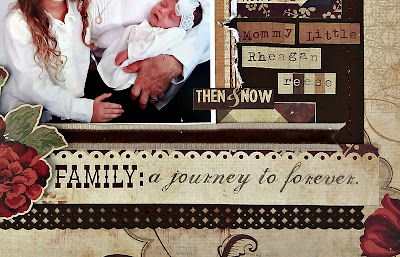 Thanks for stopping by today.  Make sure to head over to Sketchy Thursdays to see the sketch that inspired this layout and see what the other DT gals did.  Oh and play along this week for a chance to win something great from Paper Issues.
Posted by Unknown at 9:00 AM 2 comments: 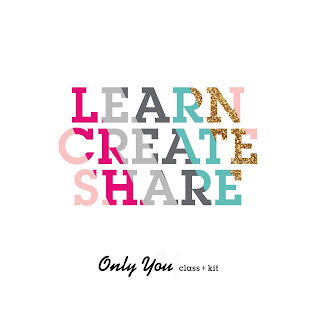 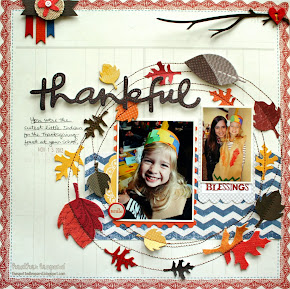